You are here: Home / Lucky Gemstones / Agate and Superstitions

Agate Superstitions and others Related to it

By Twinty Karat adapted from an original article by Chitraparna Sinha.

Although most of us think of gems as ornamental stones others believe they have curative powers. Powers that attribute to the increase of psychic power of a human being.

This includes Agate Superstitions and others related to it.

Ancient people and in many other countries today people believe in lots of other things concerning gemstones generally considered as superstitions.

Gemstones can be worn in jewelry, as jewelry, as amulets, or can just be carried loosely such in ones pocket or in a purse.

The superstitions connected with gems are very ancient and some are still prevalent today. Sometimes the gem stones are even ground into loose powder and used as medicines.

Some of these ground gemstones are even used in drinks or as flavor for beverages.

Imagine drinking some beverage flavored with ground up stone. It’s still done today if what my research turned up is true. Gem stones are said to possess magical powers.

Agate and its Powers

Agate acts as protector against storms, fever, lightning and headaches. It is said to increase fertility and promotes athletic prowess.

Agate is a lucky stone for lovers so it’s only natural that Agate superstitions would arise. While farming or gardening, it should be worn by the farmer or tied to the plow.

This ensures a good yield of the field or in your garden.

Back in ancient times, Agate superstitions made people believe Agate conferred the power of invisibility on its owner and would turn enemies’ swords against themselves.

Lucky agate stone offers protection against the Evil Eye and storms, plus grants its wearer an eloquent tongue.

In addition agate is said to cure fever, poisonous bites, and stings. As if that’s not enough agate luck goes on to improve eyesight.

If you believe in agate superstitions then it is a lucky stone. Consider a lucky agate bracelet or lucky agate charm as an easy way to protect yourself.

It can conceivably sprinkle you with some of the aforementioned goodness.

This is just one gemstone in the vast world of gems and superstitions surrounding them. The science of gemology notwithstanding, gemstones hold more, a lot more than good looks and exquisite jewelry fashion.

These gemstones open a virtual world of ancient superstitions and beliefs, many of which are still believed and followed today. 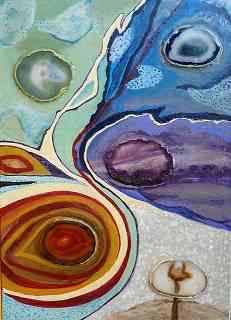 I don’t know anyone here in the United States that places much faith in any supposed power a gemstone might have.

However, I am sure there are some here that do, maybe a lot of faith in Agate superstitions.

Probably most people here, except people from other countries where gemstone superstitions are common beliefs, don’t think much about any superstitions attached to gemstones.

I’d even be willing to bet that most people here don’t even know of the huge body of superstitious beliefs surrounding gemstones, including agate superstitions.

Click here to read about Other Good Luck Charms