A Few Semi-Precious Gemstones You Should Know About 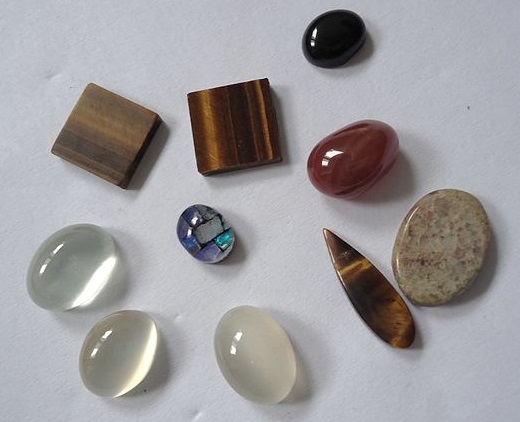 Amber is a peculiar gemstone made out of the fossilized resin from the trees. 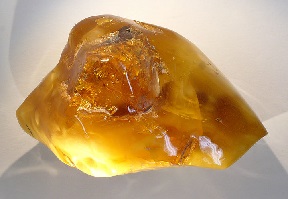 These are mostly found in the Baltics region. Amber gemstones can be expensive. Archeological evidence shows that people have been collecting and wearing amber since the Stone Age. Amber is extremely popular in jewelry, especially in pendants, rings and earrings. 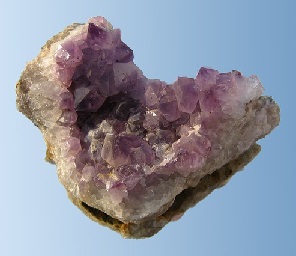 Amethyst has been prized since ancient times. Its been used in royal jewelry such as scepters and crowns. It can be found in large defined crystal points or or in clusters of small terminations.

If you are an emotional person choose amethyst. This gemstone is believed to calm the mind. Amethyst is available in purple shades. 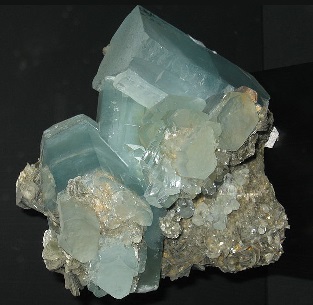 Beryl gemstone is believed to bring strength and power So in olden days fighters wore this gemstone to protect themselves. Beryl is available in several colors. The hexagonal crystals of beryl may be very small or range to several meters in size.

Pure beryl is colorless, but it is frequently tinted by impurities; possible colors are pink, green, blue, yellow, red, white and golden. This semi-precious beryl gemstone is popular in its durability. 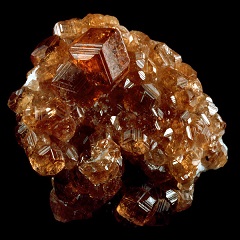 Garnet gemstone is another popular semi-precious stone known for its durability. This red gemstone is believed to purify the blood and also protects from blood problems like hemorrhaging.

Garnet, however is not a single mineral. Garnet describes a group of several closely related minerals. Garnets come in a variety of colors and have many different varieties. However, the most widely-known color of Garnet gemstones is dark red. 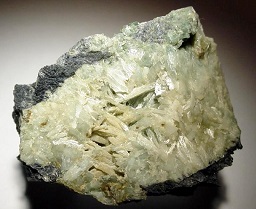 Jadeite; with crystals which are uncommon for the species. Photo by Rob Lavinsky, iRocks.com – CC-BY-SA-3.0

Jadeite gemstone originated from Guatemala and Myanmar. Jadeite was first used to manufacture weapons, ax heads, and various tools for scraping and hammering because of its toughness. Jadeite gemstone, normally called jade, is adored by the people of China.

Jadeite and nephrite are materials that have both been called “jade” for thousands of years. Although most people who think of jade visualize a beautiful green gemstone, the mineral occurs in a wide variety of colors that include green, orange, white, lavender, blue, black, red, gray, and yellow.

The beautiful Alexandrite gemstone was discovered in Russia during 1831. Although alexandrite is a relatively young gemstone, it has a noble history. Since it shows both red and green, the principal colors of old Imperial Russia, it inevitably became the national stone of tsarist Russia.

The transparent Alexandrite becomes bright green when you are out in daylight and changes to raspberry red color when you are away from daylight. Beautiful alexandrite in top quality is very rare indeed and hardly ever used in modern jewellery. Alexandrite is a stone for experts and connoisseurs, a true understatement stone.

There are mystical qualities ascribed to this gemstone. Maybe you will feel some of the mysterious magic and lore ascribed to it. It is considered a stone of very good omen. In critical situations it is supposed to strengthen the wearer’s intuition, and thus help him or her find new ways forward in situations where logic will not provide an answer. Alexandrite is also reputed to aid creativity and inspire the imagination. 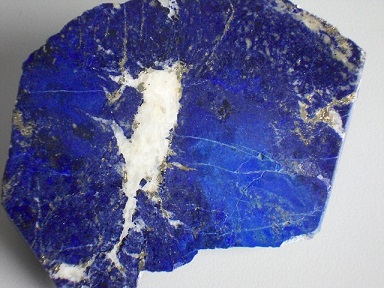 Lapis lazuli is one of the rare semi-precious gemstones with intense blue color. This fascinating gemstone is available in Afghanistan, Argentina, Chile, Canada, and Russia.

The value of this stone to the world of art is immeasurable. The ultramarine of the Old Masters is nothing other than genuine lapis lazuli ground up into a powder and stirred up together with binding-agents.

This marble-like gemstone can be used to manufacture radiant blue watercolors, tempera or oil-paints. Nowadays the color can be made synthetically. Lapis lazuli is regarded by many people around the world as the stone of friendship and truth. This blue stone is said to encourage harmony in relationships and help its wearer be authentic and give his or her opinion openly. 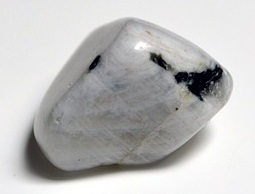 Moonstone is available in white, grey, blue, green, pink and brown shades and it belongs to feldspar variety. Of all the colors, the blue moonstones are costlier as well as liked by many people.

In earlier times, people believed they could recognize in Moonstone the crescent and waning phases of the moon. Moonstone gemstone was very popular about a hundred years ago at the time of Art Nouveau. It adorns a large number of the jewellery creations of the French master goldsmith René Lalique and his contemporaries, mainly to be found in museums and collections today.

This gemstone is surrounded by mystique and magic. For example in India, Moonstone is regarded as a holy, magical gemstone. In India, moonstones are also regarded as ‘dream stones’ which bring the wearer beautiful visions at night. In Arabic countries, women often wear moonstones sewn out of sight into their garments, because in their culture moonstone is a symbol of fertility. 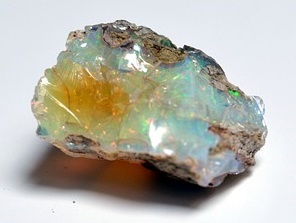 Opal is silicate and it is available in variety of colors. However, opal gemstones with rare colors are quite expensive like the rare black ones. Beautiful colors seem to be reflected in the opulence of fine Opals.

Seemingly fire and lightning effect, plus the colors of the rainbow. The classical country of origin is Australia. Almost 95% of all fine opals come from the remote outback deserts. The name Opal was probably derived from Sanskrit “upala“, meaning ”valuable stone“. Due to the differing percentage of water, Opals may easily become brittle. Because of this Opal jewellery should be worn as often as possible. Then the gemstone will receive the necessary humidity from the air and from the skin of its wearer.

Since ancient times people have believed in the healing power of the Opal. It is reported to be able to solve depressions and to help its wearer find the true and real love. Opals are supposed to further enhance the positive characteristics for people born under the zodiac sign of Cancer. Black Opal is recommended for those people born under Scorpio, and Boulder Opal is the lucky stone for Aries. 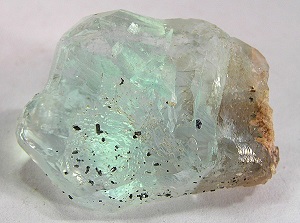 Topaz is a rare semi-precious gemstone which is available in white, pink, green, blue, yellow, brown-yellow, and even colorless. In mysticism, topaz gemstone is believed to control mental imbalances and calms the mind. It is also associated with love and affection.

The topaz is attributed with a cooling, styptic and appetizing effect. It is said to dispel sadness, anger and nocturnal fears, to warn its wearer of poisons and protect him or her from sudden death. Topaz is reputed to make men handsome and intelligent and sterile women fertile and happy.

But be careful with its magical powers, since it was also claimed that you could immerse your hand in boiling water after a topaz had been thrown into it and retract it again unharmed! Warning – don’t try that! 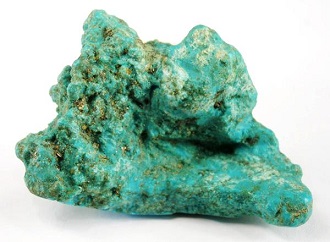 Turquoise from this uncommon Mexican locale – the La Mariquita Mine in Sonora is seldom available. Photo by Rob Lavinsky, iRocks.com – CC-BY-SA-3.0

Turquoise is considered as a precious gemstone in Asia and Africa. This gemstone is available in a variety of colors. Although turquoise is ancient, again and again it finds itself back in fashion. Its beautiful sky blue color is one of the most popular trend colors in the world of jewellery and fashion.

In many cultures of both the Old and New Worlds, turquoise gemstone has been esteemed for thousands of years as a holy stone, a bringer of good fortune or a talisman. In ancient times, turquoise were even responsible for the material well-being of the wearer. The Persian scholar Al-Qazwini, wrote: ‘The hand that wears a turquoise and seals with it will never see poverty.’

Turquoises were often worn on the turban, and often surrounded with pearls, in order to protect their wearer against the ‘evil eye‘. As talismans, they adorned daggers, sabers and the bridles of horses.

So now you know some the well-known semi-precious gemstones which are available in big jewelry showrooms worldwide. However, there are also imitation versions of these stones. You should be very careful while you are purchasing the genuine semi-precious stones.

Choose a reputable jewelry store to purchase the real semi-precious gemstones. If you are planning to purchase these stones online you can find out the quality of the gemstones by going through the customer testimonials. 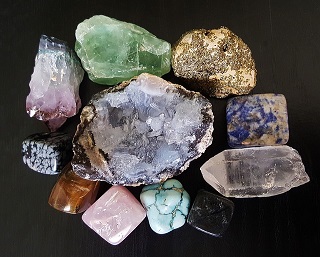 While you are purchasing precious or semi-precious gemstones you can also look for the gemstones that are associated with your birth date. To find out your exact gemstone you can check on the internet.

The internet also provides you with information about the best deal you can afford from reputable jewelry stores. You can also find some great deals on the internet that are hard to beat compared to physical stores. Places like Amazon can be a great place to buy semi-precious and precious gemstone jewelry.

You can purchase a suitable gemstone for you as well as for your beloved or friends to give them as a gift on special occasions.