By Charles L Harmon
Emerald is a highly-prized green gemstone that has been enchanting people with its beauty for over 40 centuries.


It has been valued for its healing powers and magical properties by royalty and wealthy people in history.

Later, an ancient Persian word that was translated to Latin as smaragdus was used to describe almost all gemstones that were the color green. But down through the centuries that word has somehow been changed to what we know today as emerald.

May Birthstone is Emerald

Emerald, the green variety of Beryl, is the most famous and valuable green gemstone. The many different impurities give beryl its varied coloration. Without these splendid color varieties, beryl would be a rather ordinary gemstone with only average fire and brilliance. 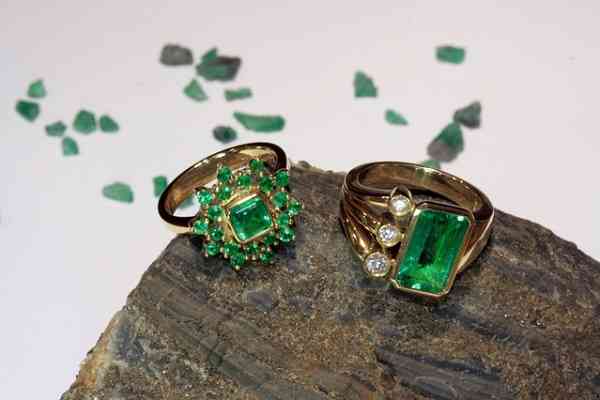 Powers and Beliefs Ascribed to Emeralds

* was used as an oracle crystal in the Middle Ages

* Has the power to increase the wearer’s attractiveness to the opposite sex.

* beauty and love, gifts of the Greek goddess Venus

“The road to the City of Emeralds is paved with yellow brick.”

Emerald’s beautiful green color, combined with durability and rarity, make it one of the most expensive gemstones with deep green being the most desired color in Emeralds.

In general the paler the color of an Emerald, the lesser its value. Very pale colored stones are not called Emeralds but rather “Green Beryl”. They are sometimes heat treated, which causes their color to turn blue and transform into Aquamarine. Emeralds can also be made synthetically.

Emerald is a rare and valuable gemstone and, as such, it has unfortunately provided the incentive for developing synthetic emeralds. Many Emerald fakes are known. Two pale colored stones may be glued together with a deep green paste, creating a stone resembling Emerald.

Faceted green glass also resembles Emerald, and it may be coated with a hard substance to mask its low hardness.

Synthetic Emeralds are also sold to unwary buyers without them knowing the stone is synthetic. Of course experts can distinguish these fakes. So if you are buying emeralds it is especially important to purchase Emeralds from reliable dealers.

Experts on emeralds can also determine if an Emerald was treated with oil or a lubricant to hide any internal flaws. Synthetic and fake Emeralds have exotic and authentic sounding names so don’t be fooled by them. An expert is warranted before purchase.

Some believe women who wear emeralds during childbirth have a less painful birth. They can also help to cure dysentery and epilepsy, negate the poison of snakes, and the blind may benefit from touching them.

At one time Emeralds were used in treating poisoned wounds as well as a general antidote for poisons. “If worn on the neck it was said to cure the ‘semitertian’ fever and epilepsy.”

Emeralds were thought to cure epilepsy, especially in children and were considered by Hindus to be a good laxative, a cure for dysentery and an appetite stimulator. Emeralds were also believed to allow its wearer to see the future.

Emeralds were used to improve one’s memory and assist the wearer in becoming a good speaker. It was believed to allow a lover to test the veracity of their partner’s oaths.

Perhaps the most common and widely known use for emeralds was for use in aiding eyesight. As Kunz states: “So general in the early centuries of our era was the persuasion that the pure green hue of emeralds aided the eyesight, that gem engravers are said to have kept some of them on their work-tables, so as to be able to look at the stones from time to time and thus relieve the eye-strain cause by close application to their delicate task” (Kunz, 380-381).

The idea that emeralds were excellent for helping eyesight eventually got to the point where that it was believed that if a blind person even touched an emerald, he would regain his eyesight.

Back in ancient times the emerald was dedicated to Venus, the goddess of love. Lovers were told that this gemstone could reveal the faithfulness of their beloved. Faithfulness was reflected in a fresh, bright green color; a cheating heart was betrayed by a lifeless color.

Emeralds have always been highly prized by royalty. Cleopatra, queen of Egypt wore emeralds from her mine in Upper Egypt. Emeralds are heavily represented in the Russian Crown Jewels from the time of the czars.

The Emperor Nero is said to have gazed through a large emerald to soothe his eyes as he watched the gladiator games in the Coliseum.

The ancients prized the emerald highly and believed it held many powers. They felt it could endow the wearer with the ability to think clearly in the past, present and future.

It was supposed to improve one’s memory, promote eloquent speech, quicken intelligence and endow the ability to foretell the future. It was also believed to promote honesty and frugality.

Powdered emerald taken as a medicine was considered a preventative of epilepsy and other serious disorders.

Colombia traditionally has produced the finest Emeralds. Zambia has been a recent significant producer. Ancient Emerald sources were in Egypt and Austria. Important Emerald deposits are in Brazil, China, Afghanistan, Russia, Mozambique, South African, and the U.S. (North Carolina).