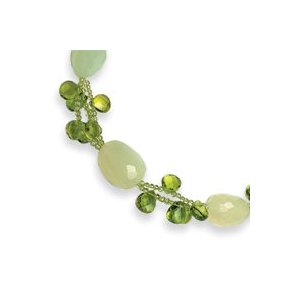 Jade is an ornamental stone. The term jade is applied to two different rocks made up of different silicate minerals:

* Jadeite: Hardness 6.5 – 7.0 Mohs, a sodium and aluminium-rich pyroxene. The gem form of the mineral is a microcrystalline interlocking crystal matrix.

Nephrite and jadeite were used from prehistoric periods for hardstone carving. Jadeite has about the same hardness as quartz, while nephrite is somewhat softer.

Both nephrite and jadeite are tough, but nephrite is tougher than jadeite.

It was not until the 19th century that a French mineralogist determined that “jade” was in fact two different materials.

Some of the earliest known jade artifacts excavated from prehistoric sites are simple ornaments with bead, button, and tubular shapes.

Additionally, jade was used for axe heads, knives, and other weapons, which can be delicately shaped. As metal-working technology became available, jade’s beauty made it valuable for ornaments and decorative objects.

Jadeite measures between 6.5 and 7.0 Mohs hardness, and Nephrite between 5.5 and 6.0, so it can be worked with quartz or garnet sand, and polished with bamboo or ground jade.

Nephrite can be found in a creamy white form (known in China as “mutton fat” jade). It is also found in a variety of green colors. Whereas jadeite shows more color variations, including blue, lavender-mauve, pink, and emerald-green colors.

Jadeite is rarer; documented in less than 12 places worldwide. Translucent emerald-green jadeite is the most prized variety, both today and historically.

Jade was used to create many utilitarian and ceremonial objects, from indoor decorative items to jade burial suits. Jade was considered the “imperial gem”.

From the Kingdom of Khotan, yearly tribute payments consisting of the most precious white jade were made to the Chinese Imperial court and there worked into objects of art by skilled artisans.

Jade had a high status and was valued more than gold or silver. Jade became a favorite material for crafting Chinese scholars’ exclusive objects, such as rests for calligraphy brushes.

They also crafted mouthpieces of some opium pipes from jade because they thought that breathing through jade would give the smokers a longer life if they used such a pipe.

Jadeite, with its bright emerald-green, pink, lavender, orange and brown colors was imported from Burma to China after about 1800.

The vivid green variety became known as Feicui or Kingfisher (feathers) Jade. It quickly replaced nephrite as the imperial variety of jade. 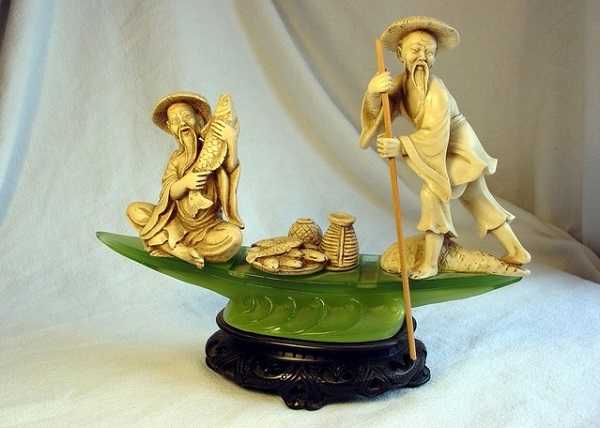 In the Chinese empire history of art, jade has had a special significance. It was comparable with gold and diamonds in the West.

Jade lucky stones were used for the finest objects, cult figures, and grave furnishings for high-ranking members of the imperial family.

Because of that significance, and the rising middle class in China, today some of the finest jade gemstones are made from jade when found in nuggets of “mutton fat” jade. It is named for its marbled white consistency.

Such jade can fetch $3,000 an ounce. That’s over ten times what it was worth a mere ten years ago.

The Jainist temple of Kolanpak in the Nalgonda district, Andhra Pradesh, India is home of a 5-foot high sculpture of Mahavira that is carved entirely out of jade.

It is the largest sculpture made from a single jade rock in the world.

The use of jade and other greenstone was a long-term tradition in Korea (c. 850 BC – AD 668). Jade is found in small numbers of pit-houses and burials.

The craft production of small comma-shaped and tubular “jades” using materials such as jade, microcline, jasper, etc., in southern Korea originates from the Middle Mumun Pottery Period (c. 850–550 BC).

Comma-shaped jades are found on some of the gold crowns of Silla royalty (c. AD 300/400–668) and elite burials of the Korean Three Kingdoms.

After the state of Silla united the Korean Peninsula in AD 668, death rituals related to Buddhism became widespread.

It resulted in the decline of the use of jade in burials as prestige ornaments.

Nephrite jade in New Zealand, known as pounamu in the Maori language (often called “greenstone” in New Zealand English) has an important role in Maori culture.

It is considered a taonga, or treasure, and therefore protected under the Treaty of Waitangi. Exploitation of it is restricted and closely monitored. It is found only in the South Island of New Zealand.

Tools, weapons, and ornaments were made of Nephrite jade; in particular adzes, the ‘mere‘ (short club), and the Hei-tiki (neck pendant).

These were believed to have their own mana, handed down as valuable heirlooms, and often given as gifts to seal important agreements.

Nephrite jewelry of Maori design is widely popular with locals and tourists, although some of the jade used for these is now imported from British Columbia and elsewhere.

Jade was a rare and valued material in pre-Columbian Mesoamerica. The only source from which the various indigenous cultures, such as the Olmec and Maya, could obtain jade was located in the Motagua River valley in Guatemala.

Jade was largely an elite good, and was usually carved in various ways, whether used as a medium which hieroglyphs were inscribed on, or shaped into symbolic figurines. Generally, jade was highly symbolic, and was often used in ideological rituals.

A stone can be readily identified as either a jadeite or nephrite gemstone by a specialized jade dealer. As most jewelers have little or sparse knowledge about jade, jade should only be purchased from vendors who specialize in jade.

Unlike the diamond industry, which has a central recognized authority that controls price and availability, known as DeBeers, there is no such recognized authority for other gemstones. As a result, stones represented as jade, even in high end jewelry stores, may often reflect poor quality.

Such stones may have color treatment to enhance appearance. They are priced at the same level as other high-end jewelry. This is not in any way commensurate with the quality of the jade stone being represented. As a result, many minerals are sold as jade. 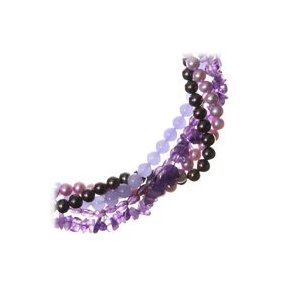 Unlike the typical high end jeweler, specialized jade dealers can provide the scientific name of specific “jade” stones upon request.

Other high-end jewelers’ clerks who sell faux jades may be unaware that multiple types of stones are sold under that name.

Chinese and Korean Confusion about Jade

In almost all dictionaries, the Chinese character yù is translated into English as “jade”. However, this frequently leads to misunderstanding.

Chinese, Koreans, and Westerners alike generally fail to appreciate the cultural concept of jade. It is considerably broader in China and Korea than in the West.

A more accurate translation for this character on its own would be “precious/ornamental rock”. It is seldom if ever used on its own to denote “true” jade in Mandarin Chinese. 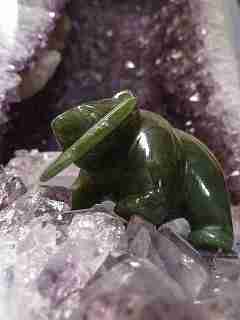 The Chinese names for many ornamental non-jade rocks also incorporate the character yù. Most native speakers understand that such stones are not, in fact, true precious nephrite or jadeite.

Even so, for commercial reasons, the names of such stones may well be translated into English as “jade”. This practice continues to confuse the unwary and is something to consider when purchasing jade. Is it really jade you are purchasing?

Jade may be enhanced (sometimes called “stabilized”). Note that some merchants will refer to these as Grades, but degree of enhancement is different from color and texture quality. There are three main methods of enhancement, sometimes referred to as the ABC Treatment System.