A highly sought after good luck charm for thousands of people is the fruit of the oak tree.

The acorn doesn’t seem like it would be a good luck charm, but it is for many. Carrying one for general good luck may seem odd. However, that is what this sought after seed is thought to do by the superstitious.

It supposedly is said to especially keep off disease and insure a long life.

With such powers it’s a wonder that not everyone carries an acorn with them. All kidding aside, this old traditional superstition of the acorn bringing good luck has been handed down over the ages. 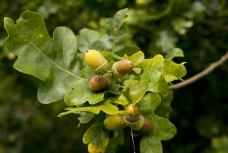 At one Time Acorns were also Ornamental

At one time you would find little ornamental acorns of gold, silver or some other material. They were even made out of plastic.

They were designed to be used as lucky pieces on bracelets or other jewelry by those who still believed in the power of the acorn. It was also used for other ornamental purposes besides jewelry.

Way back when, in the distant past, the acorn was under the protection of the goddess of Nature, Cybele, and sacred to her.

In Asia Minor, the people of Anatolia worshiped the deity Cybele.

The Vikings associated oak trees with Thor, the thunder god who created thunder and lightning. According to Norse folklore acorns and oak trees (where acorns come from), bring good fortune.

The Vikings associated oak trees with Thor, the god who created thunder and lightning.

Vikings believed that the fruit of the oak tree, the acorn, was spared Thor’s wrath, The Vikings placed a lone acorn on their windowsills to protect their houses from lightning.

That was because they believed that the fruit of the oak tree, the acorn, was spared from Thor’s wrath. Back in those ancient days lightening was thought to strike or enter one’s dwelling through the window.

Acorns Protect the Family and Premises

To avoid problems and to protect the family they placed an acorn there to protect the premises. Because of this gesture it was believed that Thor was pleased that he was respected.

In return Thor would reward those with the acorn by the window by sparing those houses that displayed his cherished symbol.

Because of its shape the acorn was looked upon as a phallic symbol of the male reproductive organ and it was considered a powerful good luck charm against all kinds of danger.

Life was expected to be continuously uninterrupted wherever the little acorn was displayed. It was symbolic of keeping the bloodline being kept alive through a chain of successive births.

Acorns Knobs and Tassels were Real

At one time, strangely enough, little acorn knobs or tassel-ends on window shades used to be real acorns. That satisfied the superstitious in the household after they added knitted or crocheted covers to put over them to protect them.

Those lucky little covered acorns were used as knobs on a cord to pull the shade up or down.

Later on, the acorns were replaced by wooden knobs. Circles were also used as tassel ends. The twin symbols of the acorn and the circle, each representing the respective male and female generative power, when used in the house, made it safe from all sorts of evil and dangers.

It also insured there was an unbroken chain of the family line for the future.